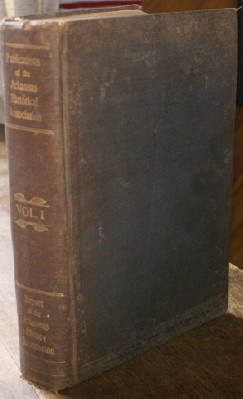 Boards worn and scuffed on edges , head and foot of spine frayed, corners bumped. Interior yellowed, endpapers loose, hinges cracked, shows evidence of having been glued. However, text block except for endpapers is still tight. ; Vol. 1; Large 8vo 9" - 10" tall; The book is about the efforts of the newly-created Arkansas History Commission to identify sources of information about Arkansas history, and to begin to categorize that information to be used in future volumes. According to the AHC web site: "One of the oldest existing state agencies, the Arkansas History Commission was created by the General Assembly in 1905. Inspired and guided during its early years by John Hugh Reynolds, the Commission is the official archives of the state, responsible for collecting and preserving the source materials of the history of Arkansas. "