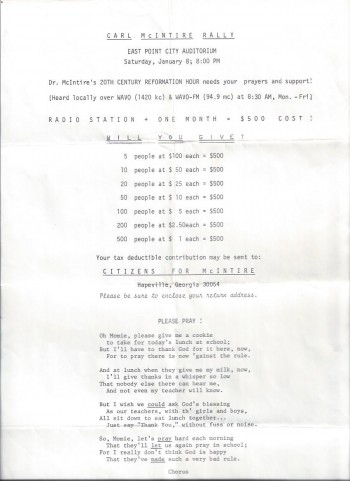 Single, mimeographed sheet with usage folds. Overall VG+. This is a mimeographed broadside/flyer, issued by Citizens for McIntyre, publicizing a rally for right wing, religion activist Carl McIntyre at the East Point City Auditorium near Atlanta Georgia on Saturday January 8, 1966. The broadside requests donation and includes the lyrics to "Please Pray" a song to the tune of "My Bonnie Lies Over the Ocean" that was written when the Supreme Court came down against prayer in public schools. In the 1960's Carl McIntyre was a major figure on the religious right.Leste Maddox was prominent in attendance at this rally. ; 4to 11" - 13" tall; 1 pages