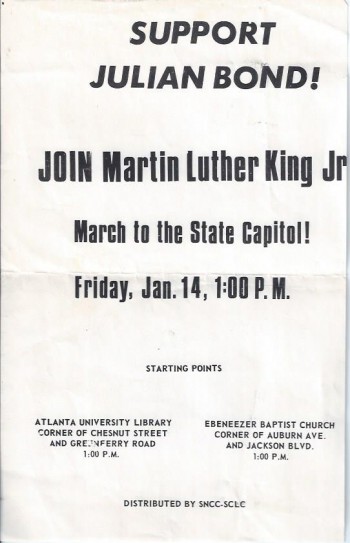 Broadside (5.5" X 8.5") with very light wear along edges with a horizontal fold in middle and light aging. Overall, about near fine. On January 10, 1966 Julian Bond was denied his seat in the Georgia Legislature because of his invovlement with SNCC which opposed the Vietnam War. On January 14 there was a protest march in Atlanta in support of Bond. This broadside/flyer was produced by SNCC and the SCLC to encourage participation. It was distributed mainly on college campuses. Dr. Martin Luther King, Jr. was involved in the march and participated. There are wonderful associations on the broadside: MLK, Julian Bond, SNCC, SCLC, Atlanta University, and Ebenezer Baptist Church. Quite uncommon. ; 8vo 8" - 9" tall; 1 pages