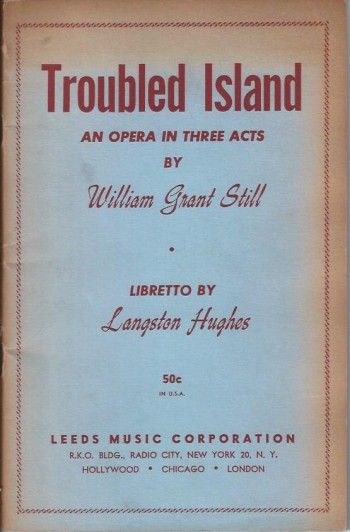 Stapled, pale blue wraps with deep red titles. This copy is toned around the edges and has some light wear at the spine but, otherwise, seems unused. Without the toning this would be a near fine copy. This opera, based on the Haitian revolution, was begun by composer Stills and librettist Hughes in 1936. Hughes eventually left the project and the libretto was completed by Verna Arvey who went on the marry Still. This edition, of the libretto only, lists only Hughes as the author. Some controversy surrounds the opera's limited run, since accusations were made that New York critics offered negative reviews because of racist attitudes. Blockson 8181; Bruccoli, FPAA, 3, 170b; Dickinson 17.; 8vo 8" - 9" tall; 38 pages