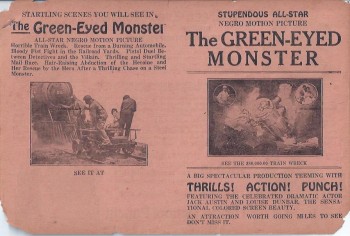 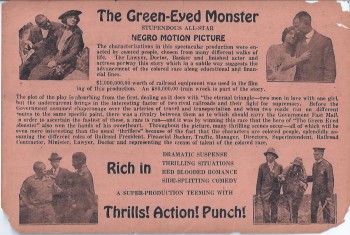 Oblong, (6X9) double-sided, newsprint sheet advertising the coming attraction of the all-black-cast fim, The Green-Eyed Monster. This is not from a newspaper but was publicity material from Norman Studios to the theatres. It has relatively light edge wear with some very small chips but with varying degrees of loss at the corners. The loss does not affect images or text. One side has two panels and was probably intended to have a single fold between them that then opened to the full length spread describing the movie. Norman Studios was located in Jacksonville, Florida and made only all-black-cast movies that were intended to treat black characters with dignity and respect. This movie, The Green-Eyed Monster, made in 1919, involved a love triangle and featured an $80,000 train wreck. The stars were Jack Austin and Louise Dunbar. The movie itself has been lost. This flyer is one of the ways that we know the movie existed. This sort of material is quite scarce and helps preserve a record of the early days of bla