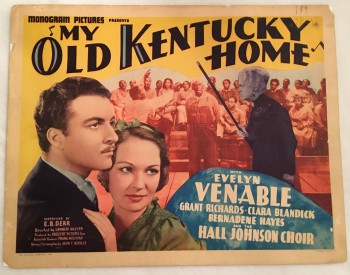 Color lobby card for My Old Kentucky Home starring Evelyn Venable, Grant Richards and The Hall Johnson Choir. The image of the Hall Johnson Choir on this card makes it of particular interest. Hall Johnson was a major African-American composer of mainly spiritual music. He is generally compared to other composers like Harry Burleigh and Nathanial Dett. He played with James Reese Europe and Will Marion Cook before establishing ensembles of his own. The choir travelled internationally and appeared in a number of movies, including My Old Kentucky Home, Dumbo (Johnson himself is credited as the voice for Preacher Crow), The Song of the South and a number of others. In the picture on this card Johnson appears to be directing the group. This card has a good bit of edge and corner wear including several chips and tears but remains quite attractive. This card came from the collection, A Cinema Apart, or the Beverly and Larry Richards Collection, which was amassed by Larry Richards over a number of years. A respected historian and a librarian at the Philadelphia Free Library, and author of the book African American Films Through 1959: A Comprehensive, Illustrated Filmography, Mr. Richards was deeply passionate and knowledgeable about African-American culture and history. In 2008, Mr. Richards tragically and suddenly died quite young, leaving behind his collection of hundreds of motion picture posters featuring African-American stars and addressing African-American issues, as well as rare broadsides, window cards, and ephemera. Additionally, he possessed items relating to African-American and slavery history. His collection has been deemed so culturally important that a section of it is now in the collection of the Smithsonian National Museum of African American History and Culture. His wife, Dr. Beverly Richards, now oversees the collection, and has lectured on and exhibited the items both nationally and internationally.; Color Photograph with Hall Johnson Choir in B&W Oblong Small 4to 9" - 11" tall; 1 pages