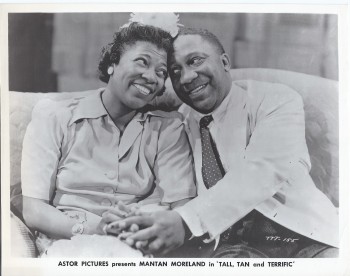 By: Pollard, Bud (producer and director)

This B&W still from the movie Tall, Tan and Terrific, shows an unidentified couple snuggling on a sofa. The female, who performs a romantic, novelty song in this scene, is likely Lou Swartz; the identity of the male actor, who does not sing, is not clear. This is likely the only image of the two. The still has light wear including some very light, flattened crease lines but is still very close to near fine. Tall, Tan and Terrific was a Black Cinema movie starring Mantan Moreland, Monte Hawley and Francine Everett. It had a lackluster plot but featured performances by many early 20th century African-American performers including Mantan Moreland, Francine Everett, Monte Hawley, Butterbeans Bradford, Rudy Toombs and others. Stills from these all-black-cast movies are difficult to find. Here is the plot from IMDB: Professional gambler The Duke (Dots Johnson) attempts to cheat Handsome Harry Hansom (Monte Hawley), who owns a successful Harlem nightclub, out of his club and his contract with his lead singer and girlfriend Tall, Tan, and Terrific (Francine Everett). This leads to a murder that is solved by club comic Mantan Moreland and club photographer Butterbeans (Barbara Bradford). But the plot takes little screen time, most of which is devoted to stage acts at the nightclub.This still was part of A Cinema Apart, or the Beverly and Larry Richards Collection, which was amassed by Larry Richards over a number of years. A respected historian and a librarian at the Philadelphia Free Library, and author of the book African American Films Through 1959: A Comprehensive, Illustrated Filmography, Mr. Richards was deeply passionate and knowledgeable about African-American culture and history. In 2008, Mr. Richards tragically and suddenly died quite young, leaving behind his collection of hundreds of motion picture posters featuring African-American stars and addressing African-American issues, as well as rare broadsides, window cards, and ephemera. Additionally, he possessed items relating to African-American and slavery history. His collection has been deemed so culturally important that a section of it is now in the collection of the Smithsonian National Museum of African American History and Culture. His wife, Dr. Beverly Richards, now oversees the collection, and has lectured on and exhibited the items both nationally and internationally. ; B&W Movie Still; Oblong 8vo 8" to 9" tall; 1 pages