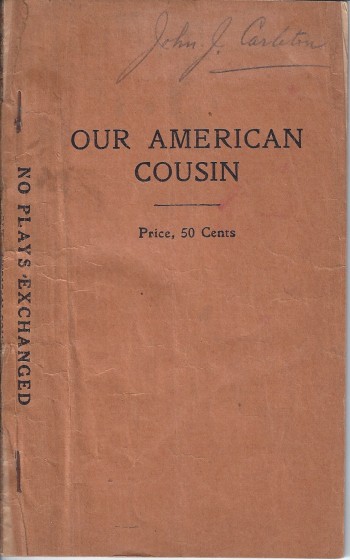 Side-stapled, tan wraps with black titles and price of 50 Cents. Some edge and corner wear, especially on spine. However, binding is secure. This is a solid, Samuel French copy with some wear and aging. One of the actors for this production has signed his name in pencil at the top of the cover. On the Cast of Charactrs page, the names of actors in this production are listed by some characters, including the name on the cover. The play is dated 1869, but ads for other plays indicate the actual publication is at the earliest around 1910 and probably several years later. This is, of couse, the paly that was being performed on the night that John Wilkes Booth shot Abraham Lincoln. ; 12mo 7" - 7½" tall; 46 +ads pages