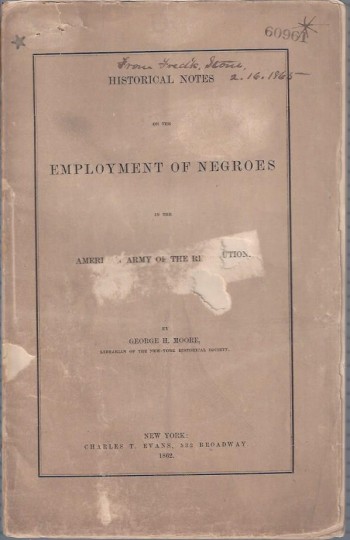 Beige, somewhat toned wraps with black titles. Covers have been retipped to pamphlet which was originally stitched (threads are gone.) Front wraps have a chip on lower spine edge, a bad scuff part of which is worn throgh on the title words, American Army of the Revolution," plus a stamped number (this came from a private collection) a stamped star and a written name and date -- "Fred'k Stone, 2.16.1865," quite possibly the US Congressman from Maryland who represented Samuel Mudd in the trial for the Lincoln assassins and who was kin to a signer of the Declaration. The rear wrap has the top right corner torn away, along with some chips and tears on the bottom edge -- really just a large remnant. The interior is in very nice condition with light toning and a faint stamp of The New York Historical Society -- the author was the Librarian for that Society. For all the problems on the wraps this pamphlet is still in the G+ to VG- range. This pamphlet is well-represented in libraries but scarce in the trade. Much good information on African-Americans in the Revolutionary War. ; Large 8vo 9" - 10" tall; 24 pages

Title: Historical Notes on the Employment of Negroes in the American Army of the Revolution