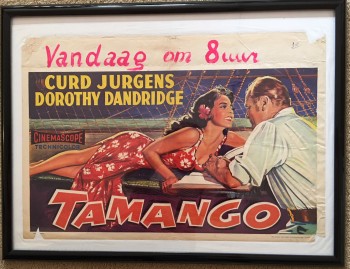 15 x 22" poster for the film Tamango. 1958. Linen backed, full sheet 17 x 23 3/4". Dutch painted letters at top indicate when movie is playing. Some tears and chips, visible in photos. Overall the poster is still VG-.The movie starred Dorothy Dandridge and Curd (later Curt) Jurgens. Because of racial events in this French film, it was never shown in the United States or the French colonies. (There is interracial romance, and a violent slave revolt. This was one of Dorothy Dandridge's films that is little-known in this country. This poster came from: A Cinema Apart, or the Beverly and Larry Richards Collection. This collection was amassed by Larry Richards over many years. A respected historian and a librarian at the Philadelphia Free Library, and author of the book African American Films Through 1959: A Comprehensive, Illustrated Filmography, Mr. Richards was deeply passionate and knowledgeable about African-American culture and history. In 2008, Mr. Richards tragically and suddenly died quite young, leaving behind his collection of hundreds of motion picture posters featuring African-American stars and addressing African-American issues, as well as rare broadsides, window cards, and ephemera. Additionally, he possessed items relating to African-American and slavery history. His collection has been deemed so culturally important that a section of it is now in the collection of the Smithsonian National Museum of African American History and Culture. His wife, Dr. Beverly Richards, now oversees the collection, and has lectured on and exhibited the items both nationally and internationally.; Color Print from Movie Still; Folio 13" - 23" tall; 1 pages