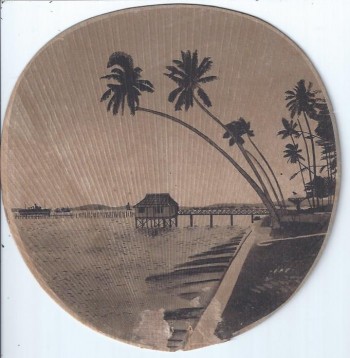 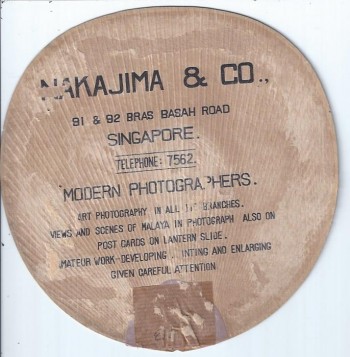 Originally the top portion of a fan, with the hand-stick now missing. Approximately 6.5” oval. Long ago a piece of tape was placed on the base to reinforce the area where the stick was removed. Still, overall, the fan is in VG condition. On front is what appears to be an engraved drawing of an oceanside dock, with swaying palm trees and ships in the distance. On the rear is the heading "Nakajima & Co." with address in Singapore and a phone number. The text reads, "Art Photography in all its branches / Views and Scenes of Malaya in Photograph, Also on Post cards, on Lantern Slide...Developing – Tinting and enlarging…” Colonel S. Nakajima, an “ever polite and efficient” photographic “artist”, with a studio at the Raffles Hotel Arcade, was the most popular photographer among the British colonial elite of Singapore, even designated the official photographer of the British Naval base. Only years later did allegations emerge that he was a Colonel of the Japanese Intelligence Service – a well-placed spy – personally decorated by Emperor Hirohito for guiding Japanese aerial assaults on Singapore after the start of the War.; B&W Drawing; 16mo 6" - 7" tall; 1 pages